What is Timed Intercourse?

Conception is only possible from approximately five days before up to several hours after ovulation. Therefore, to be effective, intercourse must take place during this fertile period. 'Timed intercourse' is the practice of prospectively identifying ovulation and, thus, the fertile period to increase the likelihood of conception.
This time of the month when you can get pregnant is called the fertile window. Its duration relates to the lifespan of the egg which is 24 hours and the lifespan of the sperm which is up to 5 days.
Because only 30% of women have ovulation within textbook guidelines, identifying ovulation and having intercourse during the fertile window may help them get pregnant faster. [1]

Monitoring of basal body temperature has been widely used and is one of the simplest and least invasive methods to detect ovulation. This method relies on a woman measuring her temperature every morning before any activity. It can be most commonly measured orally, rectally, and vaginally. Temperature fluctuates due to hormonal variations in the menstrual cycle. During the follicular phase of the menstrual cycle, temperature is lower, until approximately 1 day before ovulation, when it reaches its lowest point (called nadir). After ovulation, the corpus luteum begins to secret progesterone. The temperature increases and plateaus throughout the luteal phase. In late luteal phase, when the corpus luteum regresses and serum progesterone level decreases, the temperature returns to the lower range within 1 or 2 days before, or just at, the onset of menstrual bleeding.

When serum estradiol concentration (secreted by the follicles) reaches a threshold level, a positive feedback mechanism works on the hypothalamus and anterior pituitary gland, which results in an abrupt secretion of LH into bloodstream.
The onset of the LH surge precedes ovulation by 35–44 hr, and the peak serum level of LH precedes ovulation by 10–12 hours. It usually occurs between midnight and early morning.
This marks the most fertile period of the menstrual cycle. Because this happens before ovulation, this is a prospective method that can detect ovulation ahead of time, giving you 24-48h for timed intercourse before ovulation.
You can track LH using urine sticks like myLotus. The monitor will keep a record of your values and indicate when you start your fertile window. This is especially useful if you have irregular cycles.

Cervical mucus is secreted by cervical and endocervical glands. The appearance of cervical mucus varies during different stages of the menstrual cycle. Women may simply observe mucus found externally at the vulva or collect vaginal mucus using their fingers.
Outside the fertile window, the mucus appears thick, scant, and viscous by inspection. During the fertile window, women experience an increased amount of watery discharge, clearer, resembling raw egg white during this period. 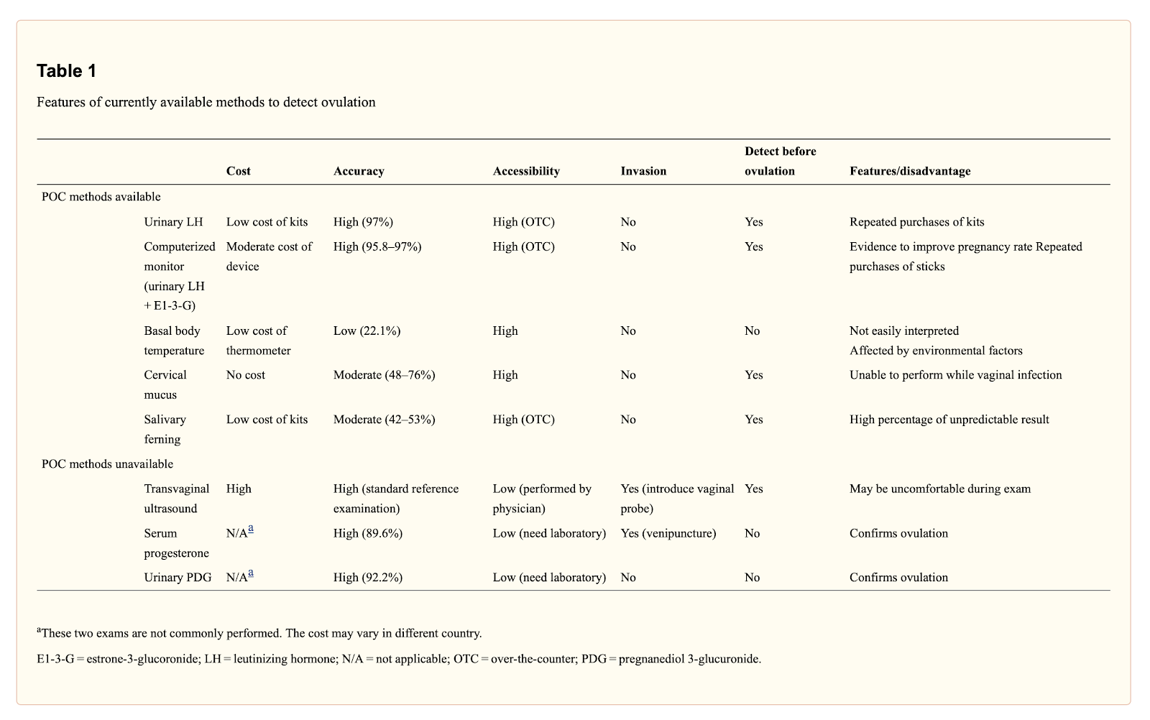 There are several methods that you can use to track ovulation, but the best methods are the ones that tell you when ovulation is happening ahead of time, giving you the best chances of timing sex for conception. Choosing a prospective method like LH monitoring is more likely to give you an accurate result and increase your chances of natural conception.
Find the Evidence